Curriculum
Secondary
Australian Studies/History/English
Jan has written books, shows, radio and television documentaries, audio tours and more.
here he tells stories from his writing and talks about how he goes about his work.
(See writing CV below)

Cost
$3.50 per student with minimum $350 per workshop (60 mins)
Travel/accom/ road toll costs may apply in some locations 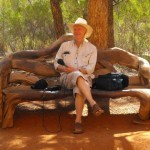 I have been the author/writer of eight books, twelve radio features, two television documentaries and several stage shows, many of them dealing with life stories. (See Writing CV below)

In this workshop I talk to students about my experiences as a writer across these various forms, including:

In this presentation I draw on forty years of performance experience to deliver a session that is educational, highly entertaining and inspiring.

Curriculum: For all years of Secondary English. Teacher’s should talk with Jan about their particular agenda.

2014  The Monster Meeting Book: Manuscript that tells the story of how Eureka began with the 1851 Monster meeting on the Forest Creek diggings, now Chewton near Castlemaine.

2011 Me & Phar Lap: the remarkable life of Tommy Woodcock: Best-selling life of the young man who looked after and loved the champion racehorse, Phar Lap.

1989 In The Footsteps of Our Ancestors  (edited with Rachel McDinny): Story of Yanyuwa & Garrwa Indigenous communities, NT, reclaiming culture by taking younger generations to country.

1992 I Was Born: The Selby Court Stories: Life stories of people living in special accomodation home.

1984  The Fruitcake of Australian Stories (edited with Deborah Sonenberg): Collection of short stories and poems.

2006 The Treaty (Hindsight, ABC RN): Program on John Batman’s 1835 ‘treaty’ with the Wurundjeri-willam clan of the Port Phillip area.

2006 The Music of Gallipoli (Music Deli, ABC RN & ABC Local Radio): Feature on the Turkish, Maori and Australian music of Gallipoli, linked with personal story of performing at Anzac Cove.

2002 A Long Lunch With Kenneth Cook (Books & Writing, ABC RN): Program on life and writing of Australian author Kenneth Cook, most famous for his novel Wake In Fright.

2002 The Ants That Ate Plutarch (Books and Writing, ABC RN): Program on the unique library at Borroloola, NT – a 4000 book Edwardian library in a town without a road.

1991 The Aeroplane Dance (for Music Deli, ABC RN):  Feature program on WW2 story from the NT, which became Television documentary of same name.

1990 Buwarrala Akarriya-Journey East (Music Deli & Free Range, ABC RN): Program on music of Yanyuwa people in NT, based on the recordings made for the television documentary of the same name.

1989 The Music Tree (and Jack the Dancer) (Bushfire Radio, CAAMA): Five-part serial, with original story of Jack the Dancer, for remote Aboriginal communities in Central Australia.

1996-8 Whitefella learns to Dance (Brunswick Institute; toured Victoria, NSW): Original one man show about a whitefella who ‘goes black’ and gets egg on his face.

Curriculum
Primary & Secondary
Australian Studies/History/English
In this workshop Jan tells stories, explains how they work
and gets the students making up their own stories.

The workshop can last between 60 – 90 minutes, and can be varied according to the needs of the school. Number can very from 25 – 100, also depending on what the school want to get out of the workshop.

“The guest storyteller at our Junior School Arts Festival, Jan ‘Yarn’ Wositzky, was so entertaining and a great presenter! Jan was very flexible and he was able to adapt his workshop formats to suit our requirements and mould his sessions to best cater to multi aged groups of 5 – 12 year old girls, with approximately 28 girls in each group. Not an easy task, and with only one day’s notice! Over the course of the 3 days, Jan presented 8 storytelling workshop sessions, and included music and humour in every session. Thank you Jan for taking part in our Arts Festival and for doing such a fabulous job!”
Marissa Caluzzi, Ivanhoe Girls Grammar 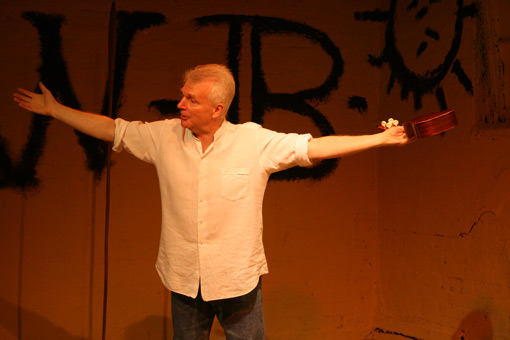