From the Biblical and boxing origins of the name ‘Bendigo’ to the fight for democracy in Australia, the Chinese diggers who called Bendigo Dai Gum San – New Gold Mountain – and the two women who started it all, this is a walking tour through what was once the richest city in the world.

It’s around two kilometres all up, with 13 stops and will take you about two hours to complete. You can take it in stages, or over a couple of days if you wish.

Your guide for this tour is Robyn Annear, author of acclaimed books such as Nothing But Gold and Bearbrass and who’s forebears were some of the first Europeans to set foot into the mud and dust of the Bendigo goldfields.

Robyn is joined by historians Russell Jack and Geoff Hocking, with gold rush songs are from the late, great folksinger, Danny Spooner.

Meet your guide, author Robyn Annear, for an introduction to the grand building you can see from this spot. 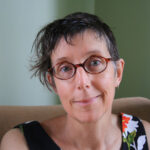 Directions
You should be on the steps of the Information Centre in Pall Mall – the old post office – and the map is with the audio on your listening device. Listen here to an introduction from Robyn.

With the help of Johnny Cash, a Biblical tale and a bullock driver, Robyn explains the origins of ‘Bendigo’.

With superb music from master musician Want Zheng-Ting, here’s the story of the Chinese coming to what they called Dai Gum San – New Gold Mountain – and the racist conflict with the European diggers; how good luck comes from the ball in the lion’s mouth; the story of the pomelo tree transported from China – with a superb song from Fay White and Jane Thompson.

Listen to the story as you walk.

Directions
From the bridge, cross into Rosalind Park, and immediately turn right. Follow the path alongside Bendigo Creek, and past the fernery on your left. When you get to the gate at the far end of the park go through the gate, cross Park Street, and in front of the Golden Dragon Museum you’ll see two lions. Go to the lion on the left, and pause the this audio until you get there.

To see the Pomelo Tree, walk around the left side of the museum, and out on Park Street. Go up the hill of Park Street, immediately take the right fork into the museum car park. On you left is a row of trees. The Pomelo is the sixth one along. 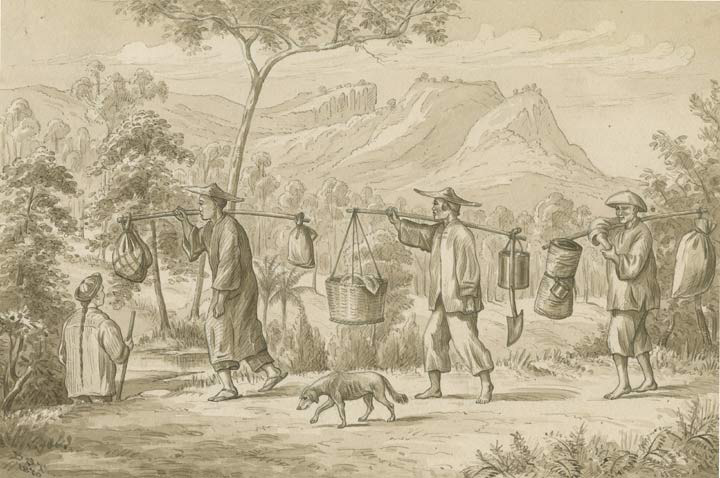 How the hopeful diggers sailed from Europe singing A Good Time a Coming only to find a despotic military regime imposing an unfair tax – the Gold License.

Directions
From the Pomelo Tree go back to Park Street, cross the road (with care) and enter Rosalind Park through the right hand gate – where you previously came from. Take the path up to the old Supreme Court, about fifty metres from the gate.

Part one of the story of the Red Ribbon Agitation, where the diggers rose to defy the brutal military police and the Gold License.

Listen as you walk.

Directions
To walk to the Police Barracks, from the Supreme Court building – assuming you’re facing towards the park – take the straight path down to your right. At the bottom, turn left and go down to the park itself. Then turn right and follow the path along the bottom of the hill.

The best view in Bendigo, across Jaara country with a song from Uncle Ricky Nelson; the cacophonic sounds from when Bendigo was a town of stamping batteries; and part two story of the Red Ribbon Agitation – white gloves, tea-chest lead made into bullets and more government troops from Melbourne.

With a song to listen to as you walk.

Directions
From the Police Barracks, continue 50 metres along Police Barracks Walk to the gate, then turn left into Gaol Road. After 100 metres you’ll see the lookout. It’s the old poppet head from a mine on the hill, about 150 metres across to your left. You can climb the poppet head for fantastic views of the city.

The spot where the centre of Bendigo was originally planned to be.

Directions
From the bottom of the poppet head stairs, go 45 degrees left and follow the path through the car park (the Art Gallery & Capital Theatre will be on your left), towards the Queen Elizabeth Oval. After
50 metres, at the far side of car park, turn left up the road alongside the oval, towards a roundabout with a palm tree in the middle. On your left is Dudley House.

The climax of the Red Ribbon Agitation story takes place here – with thousands of armed diggers  from around the globe, each wearing a red ribbon, leading to democracy in Australia.

Directions
The Capital is about 50 metres down View Street on your left, past the old Fire Station. You’ll know it by its Roman pillars.

How the diggers became workers, and in 1872 established the first miners union and were the first in the world to achieve the eight-hour day.

Directions
To get to the Trades Hall, head down View Street. It’s another 50 metres on your left.

When sly grog was rife on the goldfields there were of course the abstainers …and they still meet here every week.

Yes, a grand title for a grand building, and here you can step inside and view relics from the gold rush, including gold scales and a Miners Right.

Directions
Another 50 or so metres down, at number 18 View Street.

An architectural tour of the magnificent gold rush buildings, from a time when Bendigo was the richest city in the world.

Directions
You should now be on View Street and passing the Sandhurst Trustees Building. Continue down View Street as you listen to the podtour.

The story of how Mrs Farrell and Mrs Kennedy started the Bendigo gold rush, and more on that name – ‘Bendigo’.

Directions
It’s time now to head back towards the old Post Office building, where you began. You can go along Pall Mall or through Rosalind Park and back across the bridge.