Thank You For The Welcome - 50th Anniversary Show 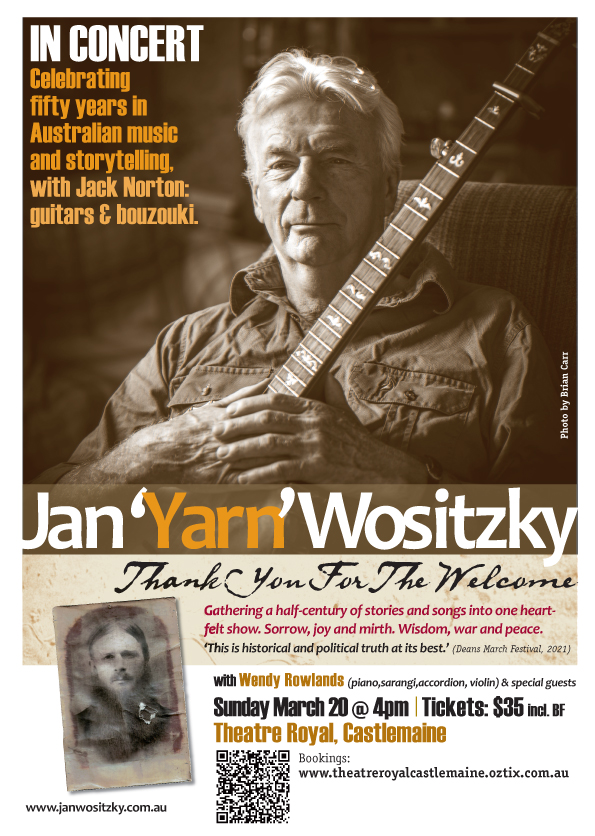 Tickets can be booked here

Can’t get to Castlemaine on 20 March, there will be a 50th Anniversary show on Friday 18 March in Albert Park in Melbourne. Information here> Upcoming Shows

Fifty years after innocently stumbling into a life in the performing arts, and having now received an Order of Australia for his contribution to music and storytelling, Jan ‘Yarn’ Wositzky is celebrating the milestone with Thank You For The Welcome, a concert packed with his favourite stuff – songs and stories Jan believes are worth remembering into our future.

“The show was intimate and moving … delivered with such ease and sensitivity, stories of love and tragedy, backed by Jack’s beautiful guitar playing.”  (Adele Duffy, Steiglitz, 2021)

“His creative soul shines clearly through … This is historical and political truth at its best.” (Dean’s Marsh Festival, 2021)

The title, Thank You for The Welcome, is Jan’s song to honour Australia’s Aboriginal people – a theme that returns throughout the show.

“Jan is a brilliant storyteller, obviously learnt from some of the best storytellers, the First Nations. He makes you laugh and cry all at once. The story of the taipans made me laugh SO much. I just wish it was true.”  (Megan Evans, Steiglitz, 2021)

There’s stories of the dancing Ngadiji women of Borroloola; a Bushwacker’s classic, Annie, translated into Yanyuwa; a lament for a mate who died of the grog; Turkish and Iranian music from Jack Norton, carrying the story of Gallipoli and the women from both sides, and of boat people incarcerated; weird happenings ‘up north’ with frozen kangaroo tails; a little bit of chainsaw music, and Dougie McLean’s secular hymn, The Singing Land – and Jan playing 5-string banjo, bodhran, rhythm bones, spoons and harmonica.It’s a journey.

“This is a true theatrical experience, taking the audience to other worlds, other times, through many cultures and many emotions.”  (Peter Sharp, Ste iglitz 2021)

“We felt privileged to be there.”  (Josiane Behmoiras, Steiglitz 2021) 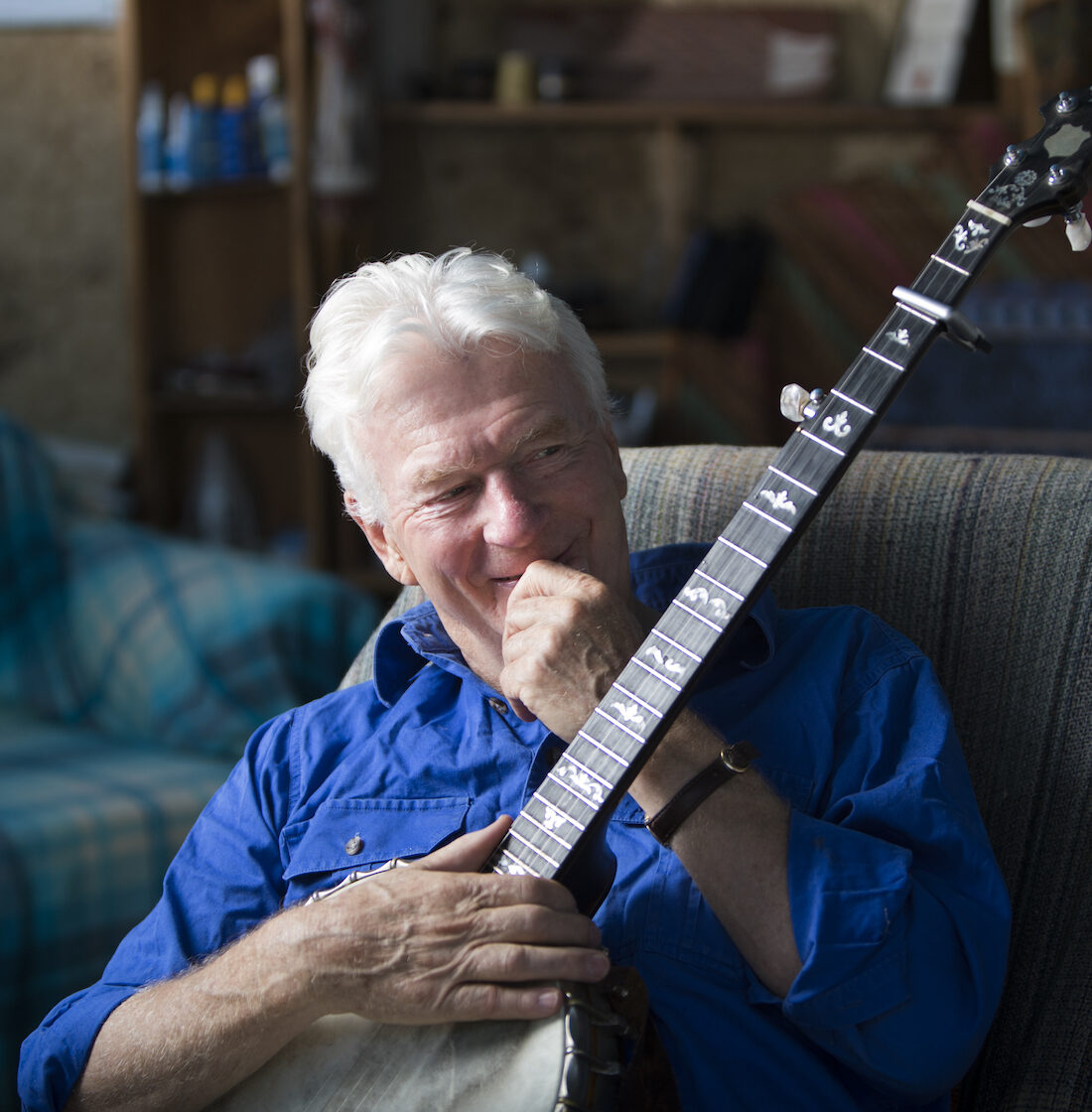 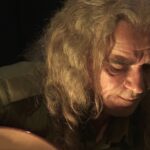 Jack Norton | Playing guitars, including the Italian chittara battente guitar, and bouzouki, Jack brings a world of musicality to Jan’s Australian sensibility. A musicologist as well as a musician, Jack plays across various musical genres, from rock, ‘Early’ music, folk to classical. In the 1980s he travelled the Middle East and Europe, immersing himself in the music and cultures of the Middle East and Central Asia. In Thank You For The Welcome, Jack brings all these influences to bear, mesmerising audiences with his superb playing. 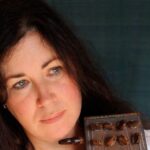 Wendy Rowlands | Wendy is a multi-talented, eclectic musician, with a background ranging from playing in orchestras such as the Australian Pops Orchestra and running her own community orchestra, The Corker Orchestra, playing violin in the Brazilian Choro band ‘Pipoca’, improvisation with the Melbourne Playback Theatre, touring with Aria Award winning Greek band ‘The Habibis’ … and much more in folk, jazz and community projects. In Thank You For The Welcome Wendy brings all the joy of her lifetime in music, playing piano, sarangi, accordion and violin. (Full bio go to www.corkerorchestra.com).

Ian White | Ian is an old friend who played on one of Jan’s inspirational albums, Freedom on the Wallaby, an LP Jan bought in 1968. As well as music, Jan and Ian have had a lot of time together ‘up north’, where Ian was an anthropologist in Arnhem Land. Ian will be playing 5-string banjo for a song or two. 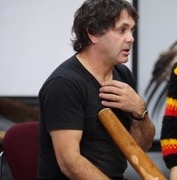 Ron Murray | Ron is a Wamba Wamba man (Swan Hill way) who now lives at Yapeen. Ron is an educator, artist, storyteller and musician, and Ron will be joining Jan to play didjeridu for the classic song of the Gurindji walkoff.