Storyteller who loves the stage recognised

Castlemaine resident Frantisek Jan Wositzky has received an Order of Australia Medal for his service to the performing arts.

He has worked as a writer and performer on several theatre and radio shows and authored or co-authored eight books.

He said the highlight of his performing arts career and one of his favourite pieces of work was the 2014 show Bilarni, which he wrote, performed in and helped produce.

“It was set in the Northern Territory … the research spun off into lots of other projects that got done before the show finally got done.” Jan Wositzky wrote a song called thanking Aboriginal people when he found out he was being honoured.(Supplied: Jan Wositzky)

He said his Czechoslovakian upbringing was instrumental in fostering his passion for telling stories through the arts.

“I understood stories from a very young age, because I had a whole family who used to sit me down and tell me stories of escaping Czechoslovakia and the Russian revolution and coming to Australia,” he said.

This is a project about an 1851 meeting of 15,000 diggers on the Castlemaine goldfields. They were the first to stand up to the Victorian Government over the Gold License tax, and their actions were the first in what became the Eureka Stockade in 1854.

We’re working towards a double CD of songs, and a book of research, so watch this space.

My new book and triple CD set, Me & Phar Lap: The Remarkable Life of Tommy Woodcock is out. It’s Tommy’s life story – the tale of a boy who loved horses and became the symbiotic other half of the legendary racehorses Phar Lap (1928-32) and Reckless (1972-7). The book is now re-edited and updated, with the most comprehensive information to date on Phar Lap’s mysterious death.  (And no, I haven’t solved it yet…but it wasn’t ‘the Yanks’.)

The book is based on recordings I made of Tommy in 1984, and now at last  The Tommy Woodcock Tapes  are available as a 3 CD set and downloads. Have a listen to Tommy  talking. He’s a beautiful yarn-spinner, and a voice the likes of we’ll never hear again.

You can purchase the book and CDs out in my online store, and for reviews and other information go to www.meandpharlap.com.au.

The recent gigs (July 2011) from the re-formed Bushwackers & Bullockies Bush Band  were a hoot. We had a ball, the audience came primed for a good time, and all the old energy was here. So to anybody who came to Beechworth, the Lomond or Newport – thanks for coming and making it such a good time. Poster below if you want to drag on onto your desktop. 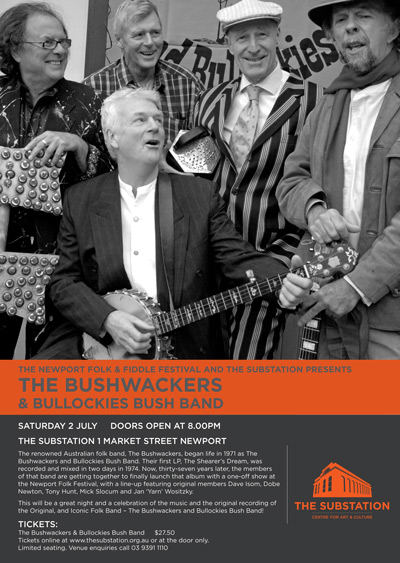 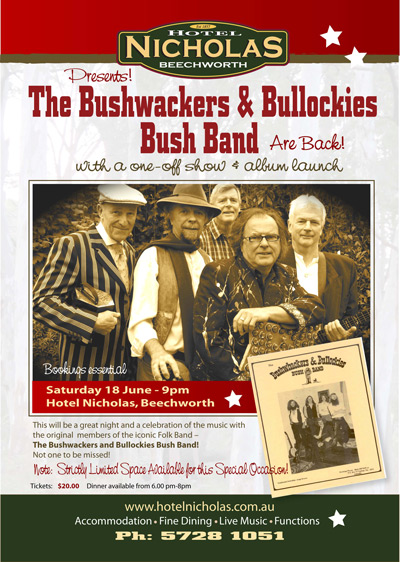